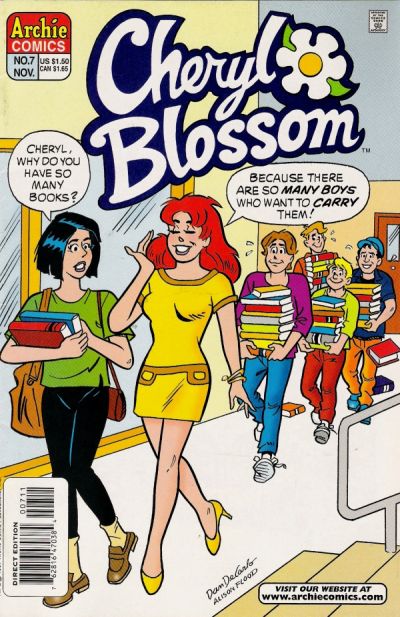 Cheryl is lying on a couch and watching a knockoff of the Home Shopping Network. She’s confused over why people buy all of this junk – and at such “obscene” prices – and guesses they’ll buy anything. She sees a doll and calls herself prettier than the actor that it was modelled after.

Jason comes by, insults Cheryl, and gives her the idea to market a doll of her own, although her mind might have already been going in that direction.

Cheryl goes to a toy company (Toy Model Inc.) and pays them to create a doll of her (she’ll handle the marketing, but she wants them to make it look good). The rather bored guy insults her but seemingly agrees to do it.

Eventually, the doll arrives in the mail. Cheryl is initially excited but then is disappointed to discover the doll melted on the way. Jason insults Cheryl. Cheryl tells him to shut the fuck up and says they’ll have to redo it.

When the next doll arrives in the mail, it’s perfect – except for having a beak like a duck. Jason laughs. Cheryl is disappointed. Personally, I’d be pissed at the toy company for such incompetence.

Finally, the doll arrives just in time, because Cheryl’s already booked to promote her doll on TV tomorrow.

The next day, the host introduces Cheryl, who’s known for “all her wacky stunts in the tabloids”. Cheryl says her doll is sure to be a collectable, given her “media notoriety”.

Cheryl says the doll captures her “shapely figure” and also comes with designer clothes and little tabloid magazines with her on the covers. It also has her scarlet red hair and “beautiful” green eyes. Cheryl’s eye color has been inconsistent. It’s often blue. In this story, it seems to be halfway between blue and green. I’ve probably seen them green as well. However, it seems Cheryl’s eyes are “officially” green. Then the heads pop off the dolls, so the host has them go to commercial. Cheryl is upset and says she’s ruined.

However, someone informs them that the phones are ringing off the hook, and everyone wants the head-popping Cheryl dolls. Cheryl is surprised and says people really will buy anything.

On another day, Cheryl takes Bunny/Priscilla to a doll collectible show. Priscilla is confused over why. Cheryl wants to see her collectible self in person. Cheryl sees little boys playing with – and enjoying – her doll. We learn the dolls are selling for $300 each. Are these kids’ parents rich? Priscilla asks Cheryl if she planned it this way. Cheryl admits she didn’t, but she says she always comes out “a head”. Boo! Lame! At least an apology is issued in a caption.

This story was pretty funny, but how can a toy company stay in business, if it keeps fucking up like this?

After that is a 1-page “Dear Cheryl” letters column by Sara Algase.