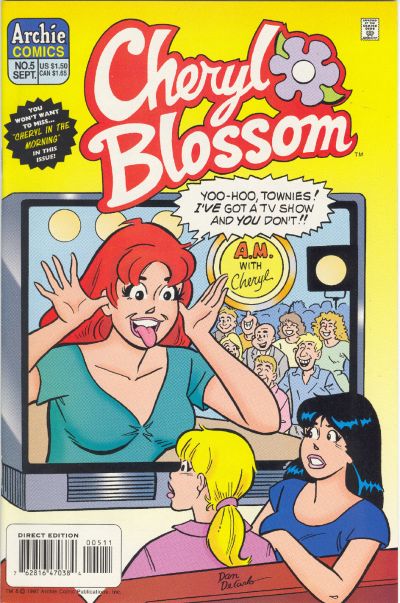 Cheryl gets in bed after an exhausting day. Once she makes sure nobody’s looking, she gets out her old teddy bear, Mr. Mumps. She’s secretive, because “people wouldn’t understand” a “sophisticate” like her with an old teddy bear. She tells Mr. Mumps that she loves him. She’s slept with him since she was a baby. She kisses him on the cheek and wishes him good night.

The next morning, Cheryl wakes up and is shocked to find Mr. Mumps gone. Worried, she searches her room and then gets angry when she recalls only Jason knows about Mr. Mumps.

Cheryl goes downstairs and asks her mom where Jason is. Penelope says he’s at the beach.

Cheryl goes to the beach, where she finds Jason hanging with some girl. Jason is annoyed to see “the big pain”.

Cheryl angrily asks Jason what he did with Mr. Mumps. A surprised Jason says he “wouldn’t touch that thing”. Cheryl starts crying and says she can’t sleep without it. Jason promises he would never mess with Mr. Mumps. Cheryl believes him and walks off, wondering what happened to Mr. Mumps. Jason actually feels sorry for Cheryl.

Back at the mansion, they try to narrow down the list of suspects. Jason rules out a prowler, because they have an “airtight laser security system”. Cheryl rules out their parents.

Jason mentions Sophie, their maid. Cheryl is suspicious of her, because she’s been acting strange lately, and she always leaves with a large bag. Cheryl bets Sophie kidnapped Mr. Mumps and is going to blackmail her for a reward. Jason points out Sophie, who’s going home. Cheryl gives chase and spots something in Sophie’s bag, but it turns out to be a dust rag. Cheryl admits she overreacted but then starts crying, wondering where her “beloved” Mr. Mumps is.

That night, Cheryl wishes on a star to show Mr. Mumps’ location. She then sees Mr. Mumps in a tree out her window, rushes outside, and climbs the tree to get him. However, the artwork is confusing. The tree branch that Mr. Mumps is sitting on is shown to extend to Cheryl’s bedroom window. However, Cheryl goes downstairs and runs outside. She’s then seen in the tree, approaching Mr. Mumps from the end of the branch (rather than climbing up the trunk). Also, stars are shown behind the crescent moon, and that always irritates me whenever I see it. These people do realize the moon remains whole, right? Anyway, a squirrel angrily grabs Mr. Mumps. Cheryl guesses the squirrel sneaked into her room and grabbed Mr. Mumps, and it’s small enough to dodge their security system. Um, but how did the squirrel get in and out of the mansion?

The next morning, Penelope comes to Cheryl’s room to wake her and is surprised and worried to not find her in bed. Jason has a laugh when he spots Cheryl sleeping on the tree branch (the squirrel sleeping on her legs) while holding Mr. Mumps. That’s all sorts of dangerous. Clifford appears out of nowhere and asks if she sleepwalked. Jason says she’s just sharing her stuffed toy and then walks off. Clifford asks him if he’s going to get her down. Jason says he’s going to alert the media, because they’ll eat this up.

This story was nice. It’s cute that Cheryl still sleeps with a teddy bear. I gotta call out the artist on the depiction of Cheryl’s bedroom, though; it doesn’t even look like a bedroom; it looks like a general large room (complete with a column) with only Cheryl’s bed and a “C” wall decoration. I know Cheryl’s bedroom (and indeed all of the characters’ bedrooms and houses) look different in every story, but this was very lazy. Also, there was no reason to randomly add Clifford to the tail-end of the final scene. Penelope easily could have delivered his lines.