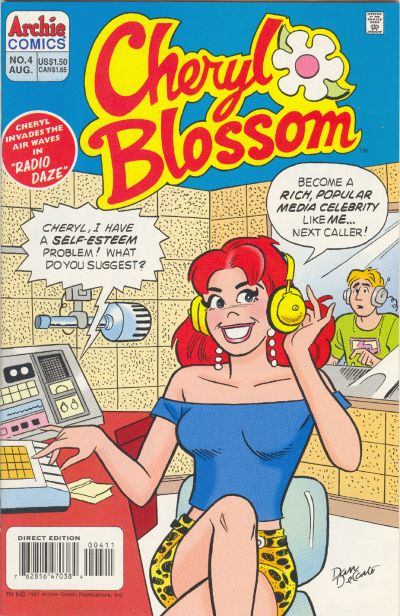 Jason is looking through old photos and finds a photo of Cheryl looking “geeky” (she had buck teeth like Ethel). He decides it’ll be great for the paper. Cheryl found a “hilarious” photo of Jason. Jason says he had the mumps. Cheryl decides to keep that a secret. Jason chases after her, demanding the picture back.

Clifford asks them what’s going on. Cheryl explains the paper is running baby pictures on the Society page. Clifford correctly guesses they’re each trying to humiliate the other one. Both he and Penelope disapprove but don’t stop them. Cheryl and Jason leave. Penelope asks why they’re such rivals. Clifford picks up a photo album and guesses it’s because they’re twins. Penelope points out a photo of herself holding Cheryl and Jason, probably as newborn babies. Wait. Penelope has dark brown hair in the photo. Was she dyeing it at the time? Or is she dyeing it now? And does that mean Cheryl’s not a natural redhead? Or is she, and she simply got it from someone farther back in the family tree? So many questions for what’s likely a careless coloring error. Anyway, a year later, Cheryl’s already starting food fights with Jason as they sit in high chairs.

When they were at the playground at age 7, Cheryl removed Jason’s training wheels. As Clifford got richer, Cheryl and Jason each had to outdo each other materialistically. Jason got an arcade game (a Pac-Man knockoff), so Cheryl got an entire arcade (named Cheryl’s Arcade). Cheryl got a Barbie knockoff electric-powered car, so Jason ordered a real sports car (at 12, he couldn’t even drive it). Clifford knows they’ve spoiled their kids but says it’s hard not to. Penelope says, if the going got tough, they would help each other out. Clifford is unsure.

Penelope points out that Cheryl missed her “junior prom” with measles. Um, judging by their appearances in the photos, I think she meant “junior high prom”. Anyway, Jason pretended to be sick, too, just to stay with Cheryl. They ended up literally fighting the whole night (Cheryl gave Jason an uppercut), but the thought was there. Clifford guesses, as twins, they have a deep bond. Penelope says it’s intense.

Later, Jason comes by, complaining to his parents that Cheryl posted a flyer around with a goofy picture of him and the lines, “Hi! I’m a goober! My name is Jason Blossom!” Cheryl’s happy, but Clifford’s upset and asks if their rivalry will ever end.

Penelope asks them if they can’t just get along. Clifford orders them out. Cheryl and Jason leave the mansion. Cheryl suggests a truce. Jason agrees and decides to treat Cheryl to a soda. He compliments her on the flyer. Cheryl says they have “quite a wacky relationship”. Jason agrees. He stops at a sign and points it out to her. It’s another bucktoothed child photo of Cheryl (at age 6) with her name and the word “Loser!” on it. Jason is pleased with himself for having the last word. A furious Cheryl chases after him and threatens to murder him.

Not much to this story. Just rich kids competing in stupid shit. However, it was nice to see Jason skip the prom to spend time with his sister.