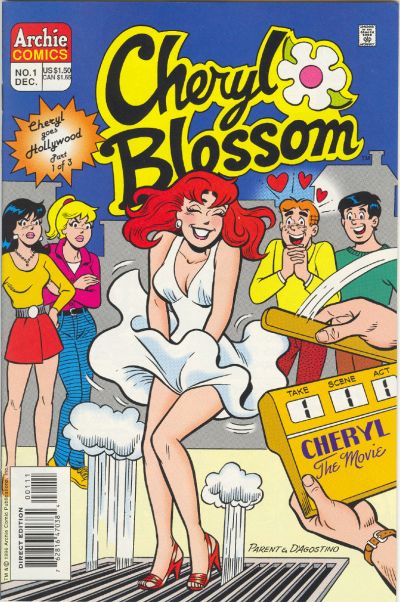 I’m sorry that there hasn’t been a review in a while. My mother died on the morning of September 17, and things had been hectic here.

Before I get into reviewing the issue, though, I want to address something. Usually, when a storyline spans multiple issues, I review the entire storyline in one post to have the story all in one place. I didn’t do that for the first two miniseries, because I underestimated just how connected that they’d be (I’d assumed the individual parts would be only loosely thematically related). I believe that’ll be the case here as well, but I’m going to continue to review the parts separately to be consistent with my reviews of the first two miniseries. Besides, the stories in the individual issues have different titles, indicating they’re meant to mostly be able to stand on their own.

Cheryl and Priscilla are hanging out outside somewhere. Two random girls arrive and heap praise. Cheryl assumes it’s for herself and is flattered. These girls (who know Cheryl) are actually talking to a random black girl named Brenda. Cheryl’s pissed and wonders what’s so great about her. Priscilla is surprised that Cheryl didn’t hear and informs her that Brenda won an award.

Cheryl jokes about Brenda winning the “Worst Hairstyle of 1996” award. It’s fairly rare that an actual then-current year is mentioned in Archie Comics. It immediately dates the story. For the record, assuming the gang are now incoming seniors, Cheryl’s current birth year is 2003.

Anyway, Brenda won the “Golden Reel” Award (not sure why that’s in quotes). As Priscilla explains, all young aspiring filmmakers send in their films to a contest; the winner gets $10,000 and a contract to produce a short film. Cheryl claims to be bored and asks why “they all” (meaning the two random girls) are flocking to Brenda. Priscilla says Brenda can make her friends famous movie stars. I seriously doubt that. Brenda herself is just some girl that made a good enough film to get a contract to produce a short film; she’s basically a nobody that’s been given a shot at something small. Anyway, Cheryl says it’s pathetic, walks off, and says she’s glad that she doesn’t need that kind of “phoney” notoriety. Priscilla walks off, dismissive of Cheryl.

The next day, at the mall, Priscilla comes across Brenda, who’s shopping. Priscilla asks her if she’s spending all of her prize money. Um, I guess it’s not meant to go toward her new short film. Anyway, Cheryl bought all of this stuff for her. Priscilla is suspicious and rags on Cheryl. Cheryl plays innocent and treats her “sis” to lunch. Priscilla observes Cheryl’s trying to buy some fame. Cheryl calls Brenda her best friend, but Brenda accuses Cheryl of being after a part in her next movie.

Cheryl lets loose the hysterics, and Brenda apologizes. They go to the food court. Brenda wants to eat at a cheap place, but Cheryl wants to eat in a fancy restaurant (yeah, in the mall’s food court), supposedly for the ambiance.

As Brenda sits down, she finds the restaurant “okay”. Cheryl excuses herself to use the restroom. She changes into an elegant, sleeveless, glittery blue dress. She’s paid Hank, the pianist (in this upscale, mall-based restaurant), to play while she sings her musical number. Brenda is surprised, and Cheryl reveals she’s auditioning in case Brenda makes her next movie a musical. Brenda’s angry. Cheryl lies on the piano and starts singing. The guests aren’t impressed by the “choking” sounds.

Cheryl sings “Theme from New York, New York“, embarrassing Brenda and shattering a customer’s glass. A customer warns Cheryl to not stand on the piano, correctly predicting she’s gonna trip on her microphone’s cord. (Cheryl was holding a cordless microphone in all previous panels.) Cheryl somehow falls into the lobster tank (when she’d actually fall to the floor at most), which doesn’t have a lid on it.

Cheryl gets out of the lobster tank and demands to know why no one saved her. A guy blatantly says they’re too busy laughing. Brenda tells Cheryl that she’s just not a performer. Cheryl says she doesn’t need her and leaves.

Cheryl walks along the sidewalk, wet. Um, I guess she’s walking home? Does that mean Brenda drove her to the mall? Anyway, she’s still wet and gets odd looks. Priscilla makes fun of her and is confused as to why Cheryl is seeking stardom, when she’s rich (which should be enough). “Anybody can have money”, so Cheryl is bored with it. She wants to be “on every magazine cover”. Even Prevention and AARP? Anyway, Priscilla tells Cheryl to go out there and make it happen. Cheryl takes the trade paper that Priscilla is reading.

Cheryl reads about an upcoming annual film festival, but Priscilla thinks it’s way out of Cheryl’s league. Cheryl decides to use her “financial resources” and make herself a star, producing, directing, and starring in her own film. Priscilla is doubtful.

Soon, at home, Cheryl watches TV as she tries to think of a starring vehicle for herself. Doing an action movie would make her “second fiddle” to special effects. A period piece would mean wearing “dull conservative clothes”, which she could never do. A rom-com would mean co-starring with someone prettier than her. Is Cheryl not confident in her looks? One movie on TV inspires her to do a film where a strong lady takes charge and molds young minds. She goes into the garage and gets into her sports car to drive into town and bankroll her venture. Um, shouldn’t she sit down and write a script first or something?

Cheryl says she’s driving “to Riverdale” as she passes a “Welcome to Riverdale” sign. But she’d said she’s driving “into town”. So I guess Pembrooke isn’t a town in and of itself, just an upscale community outside Riverdale’s city limits? I don’t know. Cheryl is suddenly inspired to do a documentary, which “always win awards”, and she’ll look like a “heroine”. Cheryl stops outside Pop’s and addresses the “poor slovenly citizens of Riverdale” (Archie, Betty, and Veronica). She announces they’re gonna make a movie, which confuses them.

In Pop’s, presumably on another day (they’re all wearing different clothes), Ronnie asks Cheryl what makes her think they’d want to be in her stupid film. Cheryl has others speak for her. She promised Jughead unlimited eats, Archie unlimited dates, Pop a fee for using his place, and Dilton that she wouldn’t humiliate him publicly for one month.

Ronnie says she’s rich and can’t be bought. Cheryl introduces Ronnie to her director, a Brad Pitt knock-off. As Cheryl predicted, Ronnie gets a lady-boner and suddenly wants to be in the movie.

Cheryl is bored filming the documentary, because nothing interesting is happening in Riverdale. Just give it a while, Cheryl. Rather than do the sensible thing (make the documentary about her helping communities and individual people while also having some fun on the side), Cheryl decides to “save” Jughead from a “falling” ladder. She just ends up getting them covered in paint.

Later (on another day, I guess), Cheryl shoves Betty and Ronnie into the river in order to “save” the “drowning” girls. Betty points out that this water’s not even deep. Ronnie calls Cheryl a con artist. Cheryl gets a large stick and has the girls grab it. Ronnie and Betty do as told, pulling Cheryl into the river. Ronnie and Betty yuck it up.

Cheryl demands Brad turn off the camera. When he refuses, she fires him, which doesn’t bother him at all.

On another day, at Pop’s, Cheryl has taken over as director of the documentary. She’s hired a Quentin Tarantino knock-off as her new writer. She hands the scripts for Cheryl: The Movie to the gang. Archie is confused over there being scripts for a documentary.

Note: there’s a headshot of a winking Cheryl next to her logo at the beginning of this part, and she has green eyes, whereas she has blue eyes in the rest of the issue.

On another day, Betty is frightened to see a fire, even though it’s clearly a fake building that’s on fire, and someone is recording it with a camera. Archie has to point this out to her. Jughead is upset and, oddly, says he’d be out of here if not for Pop’s getting a fee. I’d think his unlimited eats would be a bigger motivator. Cheryl calls action, and two actors behind the set ham it up for the camera. There’s a major error here. There are now bushes suddenly in front of the building. This is on the same page.

Cheryl somehow manages to strip naked and throw on a sexy firefighter get-up in a few seconds (rather than already having it on beforehand). She then “saves the day” to much cheering and adoration. Ronnie’s about to vomit.

The next day, at school, they’re having a rehearsal. Why here? Are they doing this after school, and it’s just convenient to have everyone already in the same building? Anyway, Betty is surprised at the “crazy lines” in the script. Cheryl says, if she’s not comfortable, she doesn’t have to do it, but she wants her to try.

Basically, according to the script, Ronnie is dumb, Archie has a criminal record, Betty has acne, and Jughead’s just an unspecified failure. So Cheryl’s doing a Dangerous Minds knock-off film, playing the “savior” teacher that turned a bunch of “hoodlums” into prime students through her “tough love”, caring, and 185 I.Q. (sure). Ronnie’s pissed.

Cheryl is off to work with “needy orphans”. Ronnie and Jughead quit. Cheryl reveals a hidden camera (behind a wall mirror). So she got (or didn’t get) footage of them reading their scripts. She considers this to be putting one over on the “suckers”. They chase Cheryl out of the school. Outside, Priscilla and a random Pembrooke student (who looks kind of like Jason but is too short to be him) make fun of Cheryl.

Cheryl hides in bushes. Then the real Jason (who happens to be in the area) saves Cheryl. They ride off. Cheryl asks him why he’d save her. He says “Blood is thicker than water, sis!” Cheryl is happy about how she “duped” the gang. Jason pulls out a video camera and claims he got all of the blunders on film…somefuckinghow. Cheryl is shocked and worried. Um, just grab the camera and expose the film.

This story is pretty fun, but Cheryl is going about trying to make a movie all wrong. It’s frustrating to watch her be this short-sighted and naive.

The following info comes from Grand Comics Database: After the story is a 1-page illustration by Dan Parent, Rudy Lapick, and Barry Grossman titled “Cheryl Hollywood Style”. This fashion page is not included in the digital edition, which is a shame.