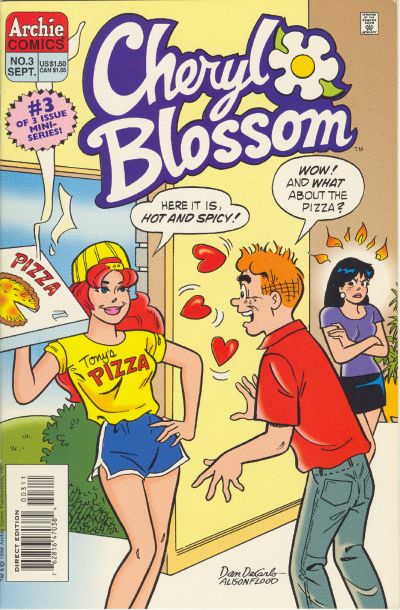 Cheryl is in Mr. Lodge’s office, relaxing by leaning back in his chair and resting her feet on his desk. She’s happy with the situation, especially Veronica being pissed. Mr. Lodge comes in and screams at her to get the fuck out of his chair. She does and calls him Hiram. He insists it’s “Mr. Lodge”.

He has her run an errand for him: take a set of blueprints to his home in advance of a meeting that he’s gonna have with an executive there. Mr. Lodge will be delayed, but he wants the executive to be able to study the blueprints before he gets there. Cheryl heads off, hoping to run into Veronica, who can’t kick her out.

Cheryl arrives at Lodge Manor. Smithers lets her in and lets her know the conference room is the third room on her left. Cheryl doesn’t get even that far, since Ronnie has Archie over and is talking shit about Cheryl to him.

Ronnie believes Cheryl wormed her way into the company (which, of course, is not what happened). Cheryl listens in on Ronnie’s hysterics and finds it hilarious. A maid comes by, so Cheryl hides behind a large vase. Then the geography gets fucked up. Cheryl and the vase were clearly in the hallway outside the room, but now they’re suddenly inside the room, and Cheryl’s stuck there with no way to get out without being seen. That is so fucking sloppy.

An hour later, Hiram arrives in the conference room and greets a pissed Mr. Drysdale. Hiram is shocked that the blueprints haven’t arrived and claims they should have been here “hours ago”, despite only one hour passing.

Cheryl finally decides to make a break for it after throwing one of her tubes of lipstick to distract Ronnie and Archie. And…the vase was just inside the doorway. Cheryl could have just crawled away at any time, and they never would have noticed her!

Cheryl accidentally left the blueprints in the room and tries disguising her voice to trick Ronnie and Archie. Before it can go further, though, Hiram spots Cheryl and demands to know what the fuck’s going on. Cheryl bullshits. Ronnie finds the blueprints. Cheryl explains.

Ronnie bursts into tears again, accusing Cheryl of eavesdropping. Hiram’s pissed at Cheryl. Cheryl begs him for one more chance. Hiram considers it, but then Ronnie, threatening to cry until September, demands he fire Cheryl, so he does. Cheryl storms off, upset. Ronnie’s pleased.

At the employment office, Ms. Flanders is enjoying the “peaceful” day, unaware of Cheryl’s approach.

Cheryl walks in. Ms. Flanders freaks out. They exchange some banter.

Cheryl eagerly accepts the one job available – until she learns it’s pizza delivery. She cries but then reluctantly accepts it to prove a point to Jason and avoid his insults.

Soon, Cheryl’s on the job and can’t help insulting the pizza as she’s tasked with delivering a stack to Armondo’s Menswear.

While driving the pizza van (the business is called Pizza Shack), Cheryl gets hungry and helps herself to some pepperoni. Realizing she fucked up the pizzas, she decides to “mush things around”.

She delivers the pizzas, but they’re fucked up, disgusting the manager. Cheryl gets a lady-boner for the customers.

The manager and another employee offer her a commission job, and she gladly accepts.

By the next day, Cheryl really excels at her job (her looks certainly help), impressing the manager. She makes the company a lot of money and gets a funny joke in.

The manager sends Cheryl to try to sell something to a browsing customer. Cheryl is shocked to discover it’s Jason. She takes a few insults from him.

Jason talks up his job at the brokerage firm again. They argue for a bit. Jason watches Cheryl flatter a fat customer and do a great job at selling, which disgusts him and makes him go back to his office.

The manager has to take a package to the post office. Cheryl volunteers to take it, so she can get some fresh air and do a little advertising. Since they’re in a lull, he allows it. On her way out, Cheryl collides with an incoming customer. She excuses herself. He flirts with her. She makes a note to hurry back and sell him a few suits.

On her way to the post office, Cheryl hands out business cards (even to kids) and causes traffic jams and near-accidents.

At the post office, while waiting in line, Cheryl sees the customer that she’d bumped into on a wanted poster. He’s “the Gentleman Bandit”. It might be a poor artistic choice, but Cheryl seems happy when she sees it.

Cheryl rushes back to the store to let the guys know but puts on a grin once she enters to avoid tipping the bandit off. The manager and other employee leave for lunch. Cheryl’s worried about being left alone.

Cheryl winks at the manager, but he misinterprets it and tells her where the eye drops are. The guys leave. Cheryl decides to call the police but is so nervous that she can’t remember the number for 911. Ha. The bandit comes up from behind and freaks her the fuck out. He wants Cheryl to show him some suits.

Cheryl’s so nervous that she accidentally makes a bunch of criminal-related puns. The bandit goes into the fitting room.

Cheryl blocks the door with a bunch of stuff and then calls the police.

The manager and the other employee arrive just in time for a cop to explain how Cheryl “just captured one of the country’s most wanted criminals”. Cheryl’s pleased.

The next morning, at breakfast, Clifford heaps praise on Cheryl. Cheryl thanks him. Jason’s upset. Cheryl gives her dad a check for the $3,000 down payment on her new car.

Clifford’s shocked and asks her about it. Cheryl reveals it’s reward money.

Later in the day, Cheryl’s gotten her new blue sports car. She thanks her dad and kisses him. She takes the keys and leaves for work. Her mom is pleasantly surprised. That soon turns to shock as Cheryl reveals she’s going to the post office, having decided to become a bounty hunter and live off rewards. She gets in her car and tears off. Penelope faints, and Clifford catches her.

This story is pretty funny. The ending is pretty dumb, though. Cheryl’s giving up a job that she’s genuinely really good at to…do what, exactly? Check out the wanted posters at the post office and then hope she runs into the criminals? Does she plan to somehow track them down?

The following info comes from Grand Comics Database: After the story are a page of fan art and a “Last Dance Crossword” featuring Cheryl and Archie. None of this extra stuff is included in the digital edition, which is a shame.

Anyway, this was a fun miniseries, and it apparently did well enough that a new one started just three months later. We’ll get to that next.