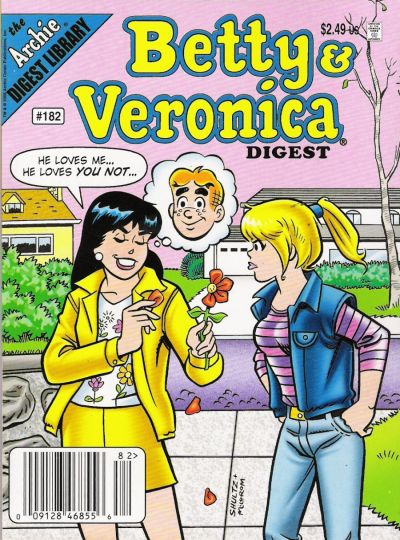 *I’m posting an old review that I wrote in 2008, of a story in a digest that I no longer own. I didn’t make note of anyone other than the writer back then; the info comes from Grand Comics Database.

In this “b-side” story, the spotlight is on Tomoko Yoshida, a recurring Japanese character.

Betty sees Tomoko running on a sidewalk, greets her, and asks where she’s rushing off to. Tomoko says she’s covering a story for the newspaper. Betty says it’s summertime; there is no school paper. It turns out that Tomoko got a job for the Riverdale Gazette as a second-string reporter. Betty says it’s exciting. Tomoko says it’s okay but wishes she got some more exciting stories to cover. Tomoko says it’s a reporter’s job to cover all stories, big and small. Betty calls her “a true pro”.

At home, Akira is making fun of the “exciting” story that Tomoko is writing about on her computer: a cat stuck in a tree. Tomoko angrily tells him to back off, because she’s got a lot of work to do. Their mom comes by and expresses her pride in Tomoko. They hear a siren from a fire truck. Tomoko rushes to check it out.

An apartment building is on fire. Tomoko gets some pictures with her camera. Tomoko wants to get some more information, but she sees Melanie (their top reporter) and several other reporters from town already talking with a firefighter. Tomoko spots a crying woman sitting on a ledge and asks if she’s okay. The woman says she’s lived here for 60 years. Tomoko apologizes. The woman says her father helped build this building decades ago, and she raised her children here.

Soon, the woman’s daughter comes with her husband/boyfriend/brother/whomever and says she can stay with them. The woman says bye to Tomoko and thanks her for staying with her. Tomoko thanks the woman for sharing her story.

The next day, Archie walks into Pop’s and talks about the fire. Betty is sitting at the counter, reading about it in the newspaper. She tells Archie and asks if he read about the other fire story (written by Tomoko). She tells him and Veronica about it and says it’s very moving. Jughead, who’s also reading the story, cries and agrees. Veronica is amazed that even “that goon” is moved.

At the paper, the editor tells Tomoko that the news-magazine 59 Minutes read her story and is going to do a feature story on the woman. The newspaper will get a credit, and so will Tomoko. Tomoko is amazed that a national television show has picked up on this. He asks what inspired her to cover this angle of the story. Tomoko says the fire was being covered by everyone else. She says the lives in the building are the real story. The editor tells her to go with her gut and gives her the address where she has to go for a story that they need her for.

When Tomoko arrives there, she discovers it’s “another cat stuck in a tree story”. A man climbs a ladder and gets the cat down for a crying girl. Tomoko interviews the happy, smiling girl with an audio recorder to get her story. Standing a short distance behind them, Betty is amazed and says Tomoko is good.

This is a nice story. We get to see some of Tomoko’s home life, and it’s nice that she seems to have an actual career. That’s rare for a teenager in Riverdale.

Wow, it went from snow on the ground in “How’s Tricks?” to summertime in this story. Archie Comics usually releases stories to match up with actual seasons, but it seems this is an exception.

Where’s Ricky Mantle? Who’s this balding guy? Yes, it’s the same newspaper as shown in “Civil Chore“. To be fair, though, he’s never referred to as the editor, but I don’t know who else that he could be.

Why is Betty standing on that girl’s property? If she wanted to see what was going on (she must live nearby or have been passing by), then I hope she asked for permission to be there. Or maybe the cat ran away from home and climbed a tree in Betty’s yard?

Overall, this is a nice story. I like the message.