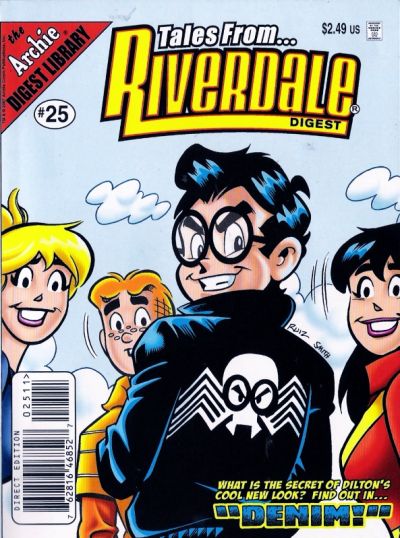 *I’m posting an old review that I wrote in 2008, of a story in a digest that I no longer own. I didn’t make note of anyone other than the writer back then; the info comes from Grand Comics Database.

In…some room (the school cafeteria?), Betty sees Dilton sitting by himself and sighing, so she asks him what’s wrong. Dilton explains none of the girls want anything to do with him. Betty says lots of girls like him. Dilton says as a friend, not romantically. Jughead comes along. Dilton points out Reggie’s luck with girls. Jughead keeps insulting Reggie. Betty says Dilton’s smart. Dilton decides to use his “strongest attribute” – his brain.

Later that afternoon, in Dilton’s lab, Dilton exposits to himself about recently collecting cell samples of all of his friends, animals’ use of pheromones, and his current plan to use Reggie’s cell sample to create a new synthetic material that will produce the same pheromones that Reggie generates naturally.

Much later, Dilton is tired and decides to call it a night, but the synthetic material leaps onto Dilton and attacks him. Dilton screams.

The next day, at school, Archie mentions he hasn’t seen the girls all day. Jughead sees Reggie and insults him. Reggie points to a guy and says he’s “monopolizing all the women around here”. They realize it’s Dilton, who’s now wearing a black jacket with a white spider (wearing glasses) on the back. Dilton behaves like Reggie: using lame come-on lines on the girls and insulting Archie and Jughead. Reggie is impressed but jealous.

In the coming days, all of Riverdale sees more of the new Dilton. Dilton hits on Betty and Veronica and even steals Midge from Moose without the latter’s knowledge. Dilton hits Jughead in the face with a pie, surprising Nancy.

One day, Archie, Betty, Veronica, Jughead, and Reggie meet outside and agree Dilton has been acting different lately. Dilton runs to them for help. After Dilton explains his experiment, he reveals the goop won’t come off. Archie tries pulling it off. Dilton says he believes it’s alive and wants to stay on him forever. He then gets “Reggie-fied” again and asks Veronica to treat herself to some “Dilton time”. Veronica says Archie is taking her to see a movie tonight. Betty is shocked and says Veronica knew Betty was going to ask Archie to see that movie. Veronica claims to have forgotten. Betty and Veronica get into an argument. Jughead draws their attention to Dilton’s outfit, which, according to Archie, is “flipping out”, which surprises Jughead. Dilton says the suit was momentarily disturbed, and it’s the high-pitched sonic vibrations caused by the girls’ hollering that caused it. Archie says they’ve got to keep the girls arguing. Jughead and Reggie each mention a date that Archie broke with one girl to be with the other, which causes Betty and Veronica to yell at Archie. The goop is affected again, and someone points out that the suit is off. Betty asks Dilton if he’s okay, and Dilton says he’s himself again. Betty says that’s the way that they like him. Veronica says it’s good to see there are some nice boys left in the world. Reggie gets a good laugh out of that. Everyone leaves Archie alone. Archie sits on the curb, upset at the jam that he’s in, and wonders if things could possibly get any worse. The goop makes its way toward Archie’s right sneaker. A blurb asks “The End?” on the last panel.

After the “Civil Chore” lameness from the previous three issues, Fernanzo Ruiz pokes fun at Marvel’s Venom, probably due to the recent release of Spider-Man 3. This time, the idea is his own, and it’s actually much better than “Civil Chore”.

Dilton lamenting girls’ lack of interest in him contradicts both past and present stories. Dilton has had a few girlfriends in the past, most notably Cheryl Blossom, and he was currently dating Brigitte Reilly. None of that information is conveyed in this story, because the entire plot hinges on Dilton being unlucky in love.

Jughead’s main purpose in this story is insulting Reggie whenever he has the chance. He contributed nothing to the plot. The story could easily have done without him.

Why does Dilton talk to himself so much? I understand it’s for the readers’ benefit, but this is nonsensical behavior. Having Dilton think this stuff to himself would have been more believable.

There’s an editor’s note at the bottom of page 3: *”Send In the Clones”–in Archie Double Digest #173! I guess this story is meant to continue on from that one. I haven’t read it, but it’s not necessary.

The second panel on page 5, where we see the exterior of Dilton’s lab at night while hearing him scream, is nicely creepy.

Speaking of which, why aren’t Betty and Veronica attracted to Dilton?

And where the hell is Cheryl? Oh, that’s right. Including her would mean they’d have to acknowledge their relationship. Silly me.

“The Double D Man” – that’s hilarious! Dilton is so awesome!

So it took the core five this long to come together and discuss the change in Dilton’s behavior? It’s a good thing that these people aren’t in charge of national security.

Why is Jughead surprised at the goop’s behavior after Archie mentions it when Jughead was the one that initially noticed it? That doesn’t follow.

The writer chickens out by having Betty and Veronica declare that it’ll be merely a “very cold day” before they ever go out with Archie again – instead of, y’know, the more common “cold day in Hell”.

So, in the end, Archie’s two-timing is exposed yet again, and Betty and Veronica completely forget about Dilton’s behavior throughout the story and their own fighting just a few panels ago. Okay, so the girls apparently have short-term memory problems.

Archie is left in a jam. Just wait until winter, Archie. It’ll be a very cold day, and Betty and Veronica will date you again.

Ooh, a cliffhanger! The goop isn’t gone! It might possess Archie!

Good. Maybe he’ll get his butt handed to him by everyone in Riverdale.

This story is fun, but it ignores Dilton’s past (and present) romances in order to work. I don’t appreciate that.