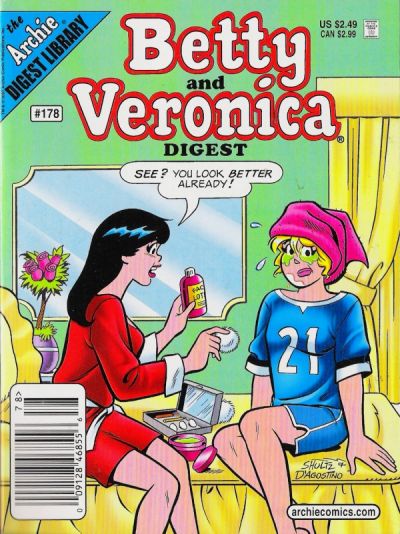 *I’m posting an old review that I wrote in 2007, of a story in a digest that I no longer own. I didn’t make note of anyone other than the writer back then; the info comes from Grand Comics Database.

Betty and Veronica are at Pop Tate’s. Betty has a bowl of what looks like chocolate ice cream with whipped cream. Veronica is anxious about something and needs to confide in Betty – and Betty only. Veronica pulls Betty out of Pop’s and drives her to Veronica’s house.

Veronica gets Betty to tell no one. Betty says she’s discreet. Veronica’s parents aren’t home. Without telling Betty anything, Veronica unlocks and opens a private room that she allows “no one to enter…ever!” Veronica’s shameful secret and big obsession is collecting shoes. She’s almost never discarded a pair that she’s owned. Betty laughs. Veronica demands to know what’s so funny. Betty says she thought it was something serious. Veronica says it is serious; it all started when she was “much younger”; she’s “worn the same shoe size now for ages!” This annoys Betty and/or gives her a headache. Betty says Veronica’s right; it is no laughing matter. Veronica mentions how her dad is always on her case about her spending habits. Betty’s “one possible answer” to Veronica’s “dilemma” is “Get rid of these shoes…all of them! Donate them to charity, or whatever! … And try to replace it with some legitimate interest…something truly worthwhile!” Veronica decides to do it.

Several days later, Betty, concerned that she hasn’t heard from Veronica, drives over to her house to “touch base” with her. Veronica answers the door and happily invites Betty inside. Veronica says, thanks to Betty, she’s free of her “shoe mania”; she got rid of all of her shoes and doesn’t miss them a bit, thanks to Betty’s “magic formula”. This confuses Betty, but Veronica says it was Betty’s suggestion to replace her interest with something worthwhile. Betty asks what. Veronica takes Betty to her room to show her. Veronica has decided to focus on just a few handbags (five of them) instead. Veronica says handbags are so much more functional and sensible than “mere footwear”, because they contain all of the “important things” in their lives, such as their valuables, cosmetics, and credit cards. Veronica hugs Betty and tells the “dear girl” that she can’t ever thank her enough. A disappointed Betty thinks “She might at least have given me some of her old shoes!”

There was a two-page preview of this story on the Archie Comics Fan Forum (along with the text, “Veronica is harboring a deep, dark secret… and it’s in her shoe cabinet! Can Betty help her get back on the “right foot?””), which sparked a debate as to what Veronica’s secret was.

I had told my friend, John (who owned a used bookstore that I frequently hung out at), about this story on Tuesday, October 9, 2007. When I revealed the secret, he just stared in silence.

Are we expected to pretend all previous instances of Veronica having a large shoe collection never happened?

This “secret” is made even more ridiculous by the revelation that Veronica has worn the same shoe size now for ages. Since Veronica’s feet look perfectly normal, the only explanation is Veronica had big feet when she was much younger, which wouldn’t have been a secret, anyway. So…I don’t get it.

Maybe that’s why Betty agrees this is no laughing matter, but this is never followed up on.

Veronica picks an odd replacement for her shoes. So Veronica doesn’t have a lot of handbags already?

In the end, it’s revealed Betty was secretly hoping Veronica would give some of her old shoes to her, which, according to John, proves Betty is even pettier than Veronica.

This story is very dumb. Veronica’s secret should have been something that we truly never would have expected. At the very least, the forum theories of a shoe box full of vibrators or Veronica holding on to outdated fashions with which she’s unable to part would have been better.

And Veronica is totally rude for separating a girl from her ice cream.