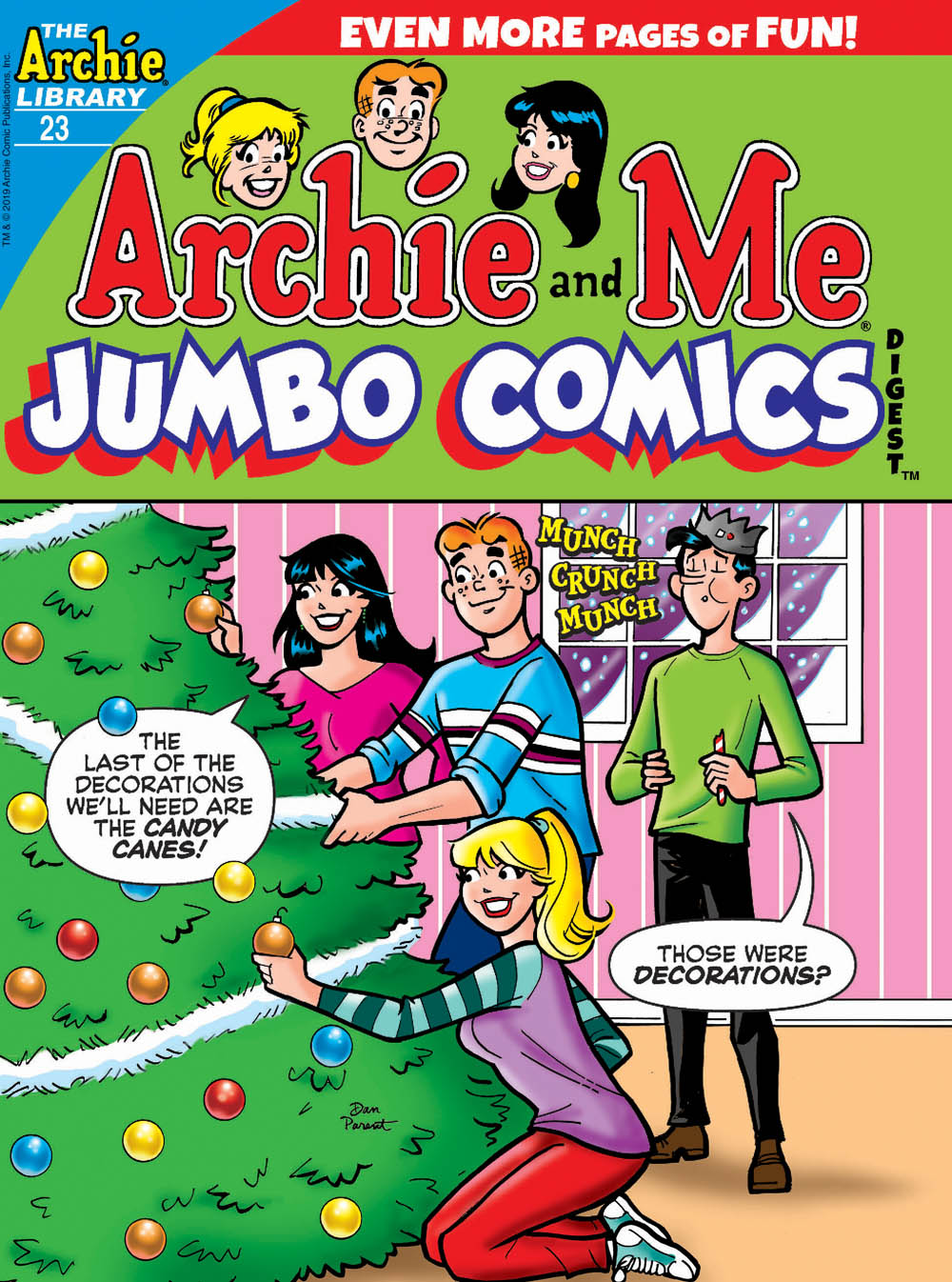 Archie’s sitting on his bed, playing an acoustic guitar. Suddenly, Jingles the Elf bamfs in, holding a suitcase. If you don’t know who Jingles is, he’s one of Santa’s elves in the Archieverse, and he often shows up in Christmas stories. He has kinda gold hair and a beard (but no mustache) and wears mostly green (but also red leggings). Anyway, he’s leaving the elf business and is moving to Riverdale for a fresh start. He figures he’ll crash with Archie for a few months until he gets his own place. Archie gets up and puts on his jacket, wanting Jingles to come over to Pop’s with him for “an emergency meeting with the gang”.

At Pop’s, Betty admonishes Jingles for quitting his job before lining up another one. Jingles is unconcerned. Reggie cracks a joke about Jingles’ height, so Jingles bamfs him onto the roof. Reggie calls out for help. Veronica says it’s almost Christmas and asks Jingles about Santa needing him. Betty asks about the other elves and Sugarplum Fairy (another recurring Christmas character). Jingles figures they don’t appreciate him and is like “Fuck ’em!”

Betty questions Jingles about his job skills, which is making toys. Ronnie says that leaves him with a limited number of job options. Not having learned his lesson, Reggie is back (how?) with “another zinger”. Jingles tries to zap him to the North Pole, but his powers aren’t working, much to Reggie’s relief. Sugarplum bamfs in, and Jughead, Betty, and Archie are happy to see her. Sugarplum also has gold hair and is dressed in green and red.

Sugarplum explains his powers are gone, because his elf status was revoked when he quit (it just took a while to kick in). Jingles is shocked (although he shouldn’t be) and says he can’t function in the real world without his magic. Sabrina (who’s visible for one fucking panel) says “Speaks for yourselves!” and winks really hard, which confuses Reggie. Jughead and Ronnie basically tell Jingles to get a year-round job. Sugarplum tells him to save for his retirement, which he’ll be responsible for.

Apparently, at the North Pole, there are old elves’ homes with all-you-can-eat dessert buffets and reindeer races to bet on. Jingles asks Sugarplum if his old job is still available. She texts Santa, who says yes and gives Jingles his wanted “cost of elving” increase. Jingles wants his powers restored before they leave. Sugarplum grants it (because she can just do that?), confused. Jingles bamfs Reggie away. As Sugarplum and Jingles leave, Betty, Archie, and Ronnie wish them a Merry Christmas. Jughead asks about Reggie.

Reggie’s back up on the roof and calls out for help. A nearby bird is confused. Of note, Pop’s is across the street from WRVL, a radio or TV station. In real life, WRVL is a Contemporary Christian radio station in Virginia.

This story was pretty cute. Of note, Pop Tate was standing behind the counter and watching all of this while going about his business of cleaning glasses, seemingly not finding it at all unusual that the gang’s hanging with an elf and a fairy.