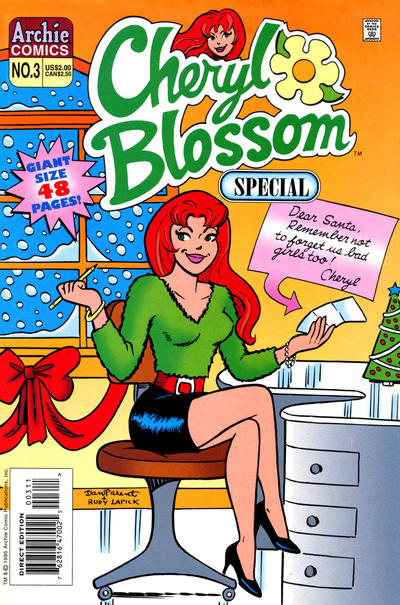 Cheryl is throwing a New Year’s Eve party at the mansion. Cedric compliments her on it. Cheryl thanks him. The doorbell rings. Jason gets it, wondering who it is, because he believes everyone’s here already. Veronica, Betty, Archie, and Jughead come in. Archie greets Jason. Jason insults them.

Archie wants to kick Jason’s ass, but Betty talks him out of it, reminding him that they’re guests. Jason asks what “idiot” invited Archie. That would be Cheryl. Jason is okay with it as long as Cheryl cleans up after them. Cheryl tells the gang to ignore Jason and make themselves at home. Ronnie understands Cheryl inviting Archie but asks her about the rest of them. Cheryl mentions New Year’s Eve, “a time for resolutions and new beginnings”. She takes Archie by the arm and goes to mingle among the guests. Veronica thanks her. Betty says that was nice of Cheryl, but Ronnie’s convinced she’s up to something.

Clifford questions Cheryl about it, and she gives her dad the same explanation. She says she’ll no longer pay attention to someone’s social ranking. He’s pleased. She thanks him and kisses him on the cheek. Jason is suspicious and questions Cheryl. It turns out that she does have a slight ulterior motive: make Daddy happy, so maybe, in the spirit of the holiday season (which it technically still is), he’ll give her stuff. Jason gets a funny line in. Archie, who certainly overheard this while bringing some questionable purple punch for himself and Cheryl, doesn’t seem to mind. Cheryl and Archie “circulate” among the crowd.

Jughead is a fucking slob, so one of the Pembrooke girls insults him, and another expands it to “undignified townies” in general. Betty silently confronts them, while a misplaced word balloon declares “I heard that!” The second girl insults Betty’s earrings, pissing her off. Ronnie tries to get Betty to calm down, because otherwise they’ll look unsophisticated. Jughead criticizes the food, but Ronnie points out that he’s still eating it. Betty declares her desire to punch one of these rich snobs in the fucking face. Thanks to a prompt from Ronnie, Betty remembers a previous story.

The next 6 pages are a reprint of the 1980s story, “Fall Guys“, presented as a flashback from Betty’s perspective, despite the fact that she wasn’t present for all of it (although I guess Ronnie could have filled in the rest).

Betty decides to not bring the party down to that level. Ronnie guesses there’s a hidden reason for Cheryl inviting them but decides they might as well try to have fun. Jughead is inspired by red tinsel on the Christmas tree and turns it into a wig for himself. He impersonates Cheryl, and Veronica and Betty laugh. Okay, that is a supremely shitty thing to do to your host. Cheryl is rightfully pissed. Betty tries to explain (“we were just…”) instead of owning up to it and apologizing. Cheryl cuts her off and reveals her ulterior motive, I guess just to hurt them back. Ronnie’s pissed.

Cheryl has the waiters throw the “trash” out – including Archie. Jason applauds Cheryl but points out that Dad’s pissed over what he heard. Cheryl is so upset that she doesn’t even care about that and goes off to be alone. She sits in the next room, still within earshot of the music (why not go up to her bedroom?), and complains about the gang. She’d like to see how dull that their lives would be if she hadn’t moved back to Riverdale. Her guardian angel (a short dude in a pilot’s outfit and with wings) shows up to show her what she asked to see. She’s surprised that she has an angel. By the way, he shows up behind her chair, and then she turns around to face him in surprise, but she’s still shown sitting and facing forward.

His “angel-cycle” (a motorcycle made by Heavenly Do-No-Sin) pops in (he earned his wheels). He puts on his goggles and tells her to hop on. They drive toward the wall but go through a portal of some kind (it’s an “angel thing”) into an “alternative future” a few years from now.

Cheryl sees a billboard and can’t believe Betty, the “blonde nerd”, is now a supermodel. Um, since when is Betty a nerd? Anyway, Betty’s on the front covers of all of the fashion magazines, and a tabloid suggests she might be marrying “a certain European prince”. Cheryl is happy that Betty didn’t end up with Archie. She guesses he’s sitting at home, all alone. The angel takes her to Lodge Industries.

Cheryl points out that Hiram hates Archie. The angel admits Archie was a janitor but adds he earned a master’s degree in Business and worked his way up to Vice-President. Cheryl’s surprised at this. The angel reveals Archie and Veronica are married. Cheryl thinks Ronnie bums around all day, but the angel says Ronnie does a lot of volunteer work. So…she’s not working at her dad’s company? Anyway, Cheryl’s bored and asks about Jughead, guessing he’s having a miserable life. The angel takes her to see.

They arrive at city hall. Cheryl’s confused. They go inside. Jughead’s the mayor, because he convinced a big ice cream manufacturer to move here. Now, he’s convinced plenty of other restaurant chains and food makers to move to Riverdale. Cheryl sees the reasoning. Jughead also gets all of the free food that he wants. Cheryl’s seen enough and drags the angel back through the portal (because she can just do that, I guess). Despite this, they exit the portal in her mansion on his angel-cycle.

The angel tells her that she must move back to where she came from (which he doesn’t get to state here, because she interrupts him, but we already learned the name of her former town). Cheryl is happy to know she can make a difference in the gang’s lives. Not wanting their lives to be a cakewalk, Cheryl goes to call them and apologize, so she can get involved in their lives again. She owes it to all of them to make their lives as unpredictable as possible. That’s her New Year’s resolution. She wishes her guardian angel a Happy New Year. She tells him to be careful going home, because it looks like a storm’s brewing. Then Yahweh or Zeus or Thor or whoever strikes the angel, turning his cool angel-cycle into a tricycle. The angel complains Cheryl’s gotten him demoted.

This story is okay. Jughead, Betty, and Veronica were horrible to Cheryl. Some of the future stuff seemed irrelevant to Cheryl, such as Betty being a supermodel and Jughead being the mayor. The only scenario that seemed at all relevant was Archie and Veronica being married. Also, doesn’t the usual format for this type of story involve an alternate present, not an alternate future?

I will note this story, coupled with the previous one, makes this issue feel truly like the first issue of Cheryl Blossom. Prior to this issue, it felt more like Betty and Veronica Guest-Starring Cheryl Blossom.

Even though I have Cheryl Blossom Special, No. 4, I’m going to be skipping it for now. There are two reasons: 1) it’s not available digitally, and 2) no one seems to know where or when the reprint stories originally appeared, and I don’t like reviewing undated stories. Don’t worry, reading the GCBD entry, nothing earth-shattering happens.