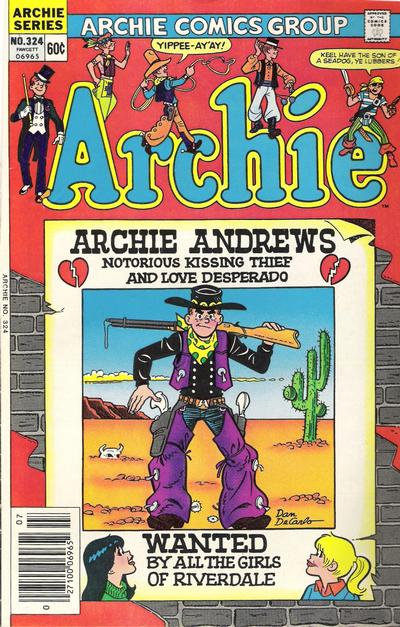 *I don’t have the original issue and am reviewing this story from the digital version of Cheryl Blossom Special, No. 1 (1995). I don’t know if anything was censored or otherwise altered for this reprint. The story might originally be uncredited. Grand Comics Database’s entries for various printings of this story don’t have any credits.

**Grand Comics Database has the following note: “Publication date on the Indicia of Archie 324 shows July, 1983 rather than May.”

Cheryl drives by in her sports car. She stops when she sees Archie and suggests they “wrestle”. He kinda flirts with her. She asks where he’s going. He’s heading downtown to pick up his car at the service station. She offers him a ride.

He accepts. She suggests he forget about picking up his car, because she and her car are at his disposal. He politely declines. She drops him off at Pete’s Service. He gets out of her car, waves, and says he’ll take a rain check. She agrees, waves, and drives off. This is the last that we see of Cheryl in this story.

Veronica just happens to be here and just happens to have overheard. She’s pissed that Archie dared to accept a ride from Cheryl to avoid walking. He nervously explains, but she’s still pissed. Jason arrives in his sports car. Archie tells him to fuck off. Veronica gets into Jason’s car without asking permission and tells him to take her away from here. He agrees.

As they drive, he asks if she’s mad. She is. They talk for a bit and have a misunderstanding over the meaning of the word “poor”. She’s overly dramatic. He flirts with her. A cop gives chase, because Jason…blew through an intersection? Possibly at a red light? I dunno.

Veronica tells him to stop in order to avoid them getting in trouble (um, only he would), but this is fun to him. We get some street names in downtown Riverdale (Wilson, Fourth, Twelfth). Despite Veronica’s yelling, Jason refuses to stop, because one more speeding citation means back to skateboarding for him. Jason ditches the two cop cars by speeding across train tracks right in front of a speeding train. Veronica screams he’s gonna kill them.

Veronica demands he stop the car, saying she wants out. He stops. She gets out and sarcastically thanks him for getting her head back on straight. He does some townie bashing. Archie just happens to drive by and offers her a lift. She starts sobbing. He gets out and hugs her. She tearfully apologizes.

He asks what happened. As they get in his car, she explains. He starts driving and threatens to decapitate Jason. As they see the cops have arrested Jason, Veronica tells Archie to look for a snob on a skateboard, which confuses him.

This story is pretty nice. Jason’s insane. Ronnie’s lucky to be alive.

This story was reprinted as a flashback within the “Coming Distractions” story in Cheryl Blossom Special, No. 1, in 1995.

One thought on “Comics – Over the Edge”