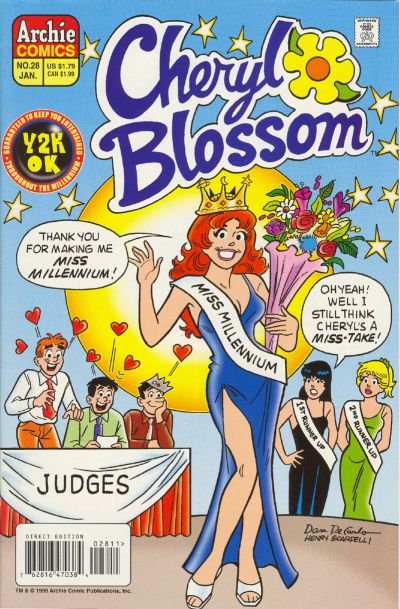 Cheryl is at a salon, getting her hair done. Her hair and outfit in this scene were designed by Jessica Longs of Colorado Springs, Colorado. Anyway, Cheryl’s going on about the “totally outrageous” futuristic Christmas party that she’s planning. Veronica, who’s getting a beauty treatment nearby, calls it “gauche”. Cheryl’s surprised.

Veronica repeats herself and asks Cheryl if she understands French. Cheryl is surprised (and angry) to see her. Um, they’ve been sitting literally a few feet away from each other this whole time. Anyway, Cheryl accuses Veronica of being jealous of her “innovative” holiday idea. Taking the cucumbers off her eyes, Veronica laughs. The Lodges are having a Twelve-Days-of-Christmas theme. The two girls talk shit about each other’s parties for a bit. Cheryl gets up. Veronica yells they’ll see whose party will be the best. For some reason, “party” is stressed in that sentence.

Having been informed by Mr. Lodge of where to find her, Betty comes into the salon with an invitation for “Ronnie”. Veronica’s still angry but manages to greet Betty. Cheryl is happy to see “Bets”, waves, and greets her. Betty greets “Cher” and gets out her invitation as well. She invites both of them to the “Super Duper Cooper Christmas”, a traditional, old-fashioned Christmas; on Christmas Eve, they’re going to curl up in front of a roaring fire, drink hot chocolate, and sing Christmas carols. Veronica lets out a yawn of boredom, which seems to annoy Cheryl.

Veronica calls Betty’s party “cute” but mentions her own. Cheryl smiles and mentions her own as well. The two of them describe their parties, which sound ridiculous and over the top. Betty’s impressed, though, and wishes she could attend both, but it’s a Cooper tradition, and she can’t disappoint her family. Cheryl’s disappointed but seems understanding. Veronica’s just grumpy. Betty thanks Cheryl for the invite and says they’re both welcome to drop by if they have any free time at all on Christmas Eve. Veronica waves but seems to dismiss the possibility. Cheryl waves and says bye to Betty.

Veronica laments “poor Betty” and her family’s “meager budget” for Christmas. Cheryl insults Veronica, pissing her off. Cheryl suddenly realizes she needs to invite Archie to prevent him from being bored at Veronica’s “lame-o” party. Veronica is enraged and decides to storm out of the salon. Amused, Cheryl calls herself gauche and says she’d never wear a mudpack and bathrobe out in the street (“and” is written twice).

Veronica feels awkward but then claims she could pull off such a “fashion statement”. Cheryl giggles and insults Veronica. Veronica screams and runs out to her limo, which is parked right outside. Cheryl walks out after her, waves, laughs, and wishes “Ronnie” a “Happy X-Mess”. Inside her limo, Veronica fumes, vowing to have the last laugh.

On Christmas Eve, at Cheryl’s, Cheryl is on her cell phone with Betty while the workers are setting up her futuristic Christmas shit. Betty gets a beep, so Cheryl says they’ll talk later and lets Betty go. I guess Betty’s family has call waiting, since this was back in the days when Betty didn’t necessarily have a cell phone (in fact, in one story, she used that fact as a joke). Anyway, Betty’s other call is Veronica, who’s giving a status update of her own party. One of the swans gets away, so Veronica has to end the call.

Betty feels sad over missing her friends’ “super” parties. A chipper Alice calls Betty to help her with the popcorn. Betty puts on a happy face and enters the kitchen, where Alice is working on…a cake or brownies or something.

Back at the Blossoms’, Cheryl supervises the hanging of the “Astrosanta” and then has the “electric galaxy” turned on. Jason comes in, dressed like Captain Kirk, having been informed by Penelope that Cheryl was doing the Christmas decorations this year. Cheryl confirms and asks what he thinks. He’s shocked.

Mistaking the source of his reaction, Cheryl realizes she forgot to turn on the Astrosanta. When she tries to plug two cords together (despite the fact that there aren’t prongs on either of them), it causes the power to go out. Jason is pissed. Cheryl suggests they call the “Blossom Power Plant”. Wait, wait, wait. They own a power plant?! Okay, sure, why not?

Unfortunately, someone at Blossom Electric informs Cheryl that the whole plant is down (it’s gotta be their fault and coincidence; there’s no way that Cheryl caused all of that by trying to plug in a stupid Christmas decoration). Cheryl informs Jason that they won’t have any power until tomorrow, cries, and declares her party is ruined.

At the Lodges’, the pond collapses, and the animals run loose. A worker informs “Miss Veronica” that it will take 24 hours to clean this up. Veronica cries over the end of her party. Of note, the Lodges still have power, so does the Blossom Power Plant / Blossom Electric serve only Pembrooke or what? That seems an oddly small service area.

At the Blossoms’, Penelope asks Cheryl what she’ll do for Christmas Eve. Clifford and Jason are pissed at Cheryl.

At the Lodges’, Hiram is pissed at Veronica over the waste of money. Hermione tells him that it could happen to anyone (um, not really). She asks what they do for Christmas Eve.

Simultaneously, Cheryl and Veronica light up as they declare they’re going to Betty’s.

On their way to Betty’s, Cheryl and Veronica tell their families what Betty had told them about the party. Jason, holding a present, gets a boner as he thinks of Betty.

Once they arrive at Betty’s, Veronica and Cheryl have a laugh over the fact that their parties were busts. Cheryl rings the doorbell. When Betty opens the door, Cheryl wishes her “Happy Holidays!” Betty is delighted to see them and invites them in to join the rest.

This story is nice. Not much else to say.

A page of fan art sits between the two parts of this story. A Cheryl Blossom “21st Century Closet!” Christmas fashion page follows the story.