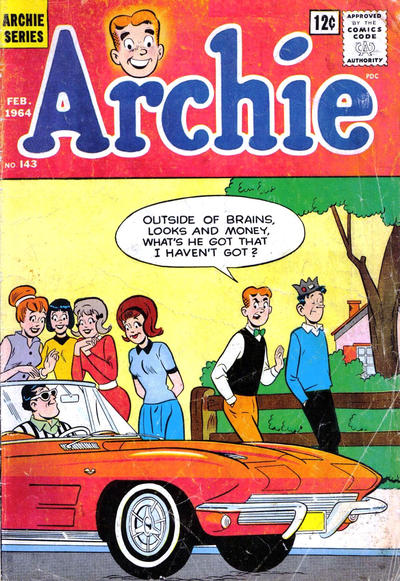 *The original story had no credits. These credits come from Grand Comics Database.

**Technically, this is a two-part story, and part two, starting on page 7, is called “Strike One Kisser!”; unusually, the page numbering is restarted.

So this is sort of an “infamous” Archie story. I happen to have scans of it, so I thought I’d review it.

Before we get into the story, here’s a fun fact, courtesy of Grand Comics Database: “When told about the story and its twist ending in his interview in the Comics Journal, a shocked Dan DeCarlo said: “I didn’t draw that, did I!?” (He didn’t; it was Harry Lucey, who was dead by the time that interview was conducted.)”

One night, while Veronica is either opening or closing the garage door (I call bullshit on this; either the Lodges would have an opener, or Veronica would get a servant to do such a menial task), either before going out or after coming home, Veronica is ambushed from behind by a “new menace”, a figure dressed in a trench coat and fedora known as the Kisser! The shadowy figure grabs Veronica, kisses her full on the lips, and takes off. Veronica falls on her ass in her driveway.

Veronica is shocked but is able to see where the perp went. She makes her way through some bushes and finds a dazed Betty sitting on the ground. Betty gets up and relates a similar experience to Veronica’s. Veronica is worried, but Betty jokes about where she was kissed and, possibly, rapists. Betty leaves, and Veronica is confused.

The next day, a bunch of random girls at school wonder who the Kisser is. Midge hopes it isn’t Moose; Moose hopes the Kisser doesn’t try kissing Midge, which upsets Midge, because she was looking forward to it. They talk for a bit more, and Midge goes down a hall by herself. Someone puts a paper bag over Midge’s head and kisses her (between panels). Midge falls on her ass and is happy to have “joined the club”.

Later, Midge tells some random girls. They love it, but Reggie and Archie don’t find it funny and wanna catch the motherfucker. They ask a random girl named Jenny to be the lure, and she accepts in order to see who the Kisser is. They’re gonna leave school after dark, and the guys are gonna jump the Kisser.

That evening, when it’s “dark enough”, Jenny and the guys leave school. The guys follow her at a distance. There’s a dumb cartoony gag where they’re both impossibly hiding behind a thin lamppost.

They see Jughead, and Reggie jumps to the conclusion that the “woman-hater” is the Kisser. Archie doesn’t buy it. They sneak behind bushes and hear kissing sounds.

They find Jenny. She asks if they got him. Reggie feels vindicated. The guys split up to find Jughead. Archie runs into a tree branch and is knocked out for a few seconds. He’s just regaining consciousness when the Kisser kisses him and runs off. Reggie arrives with Jughead, but Archie tells him to turn him loose.

The three guys debate the sex of the Kisser, whether Jughead kissed Archie, and the Kisser’s vision. Apparently, by Reggie’s reckoning, the Kisser has kissed nine girls so far. Archie says he’s gonna get to the bottom of this mystery and walks off. Reggie tells Jughead that he didn’t see any girl around. Jughead, defensive, says he didn’t kiss Archie.

The next day (I guess), at Riverdale High School, three random girls debate the new information. Reggie overhears and theorizes Archie made up the story about being kissed to throw off suspicion, because he’s the Kisser. The girls decide to be easy targets for Archie to see whether he’s the Kisser or not. Betty overhears this and is worried.

Some time later, one of the girls walks into Archie’s path on the sidewalk, trips, and is caught by him. He drops her in the bushes and runs away. The other two girls are waiting for him, no matter where he runs. He runs to Betty for help in finding a place to hide. She leads him into the woods. Exhausted, Archie lies on the ground and soon falls asleep. Betty checks to make sure no one’s around, and then she kisses Archie on the lips.

The three girls show up. As it turns out, they were working with Archie, because he had theorized to them that Betty was the Kisser. Betty is surprised Archie knew. Archie says this trap was really for her. He explains Betty kissed girls just to throw everybody off her trail; she wanted to create a mystery that no one could solve.

Betty tells a smug, self-satisfied Archie that it almost worked, but he was too clever for her. For discovering the identity of the Kisser, Betty sweeps Archie off his feet (and out of his shoes) and gives him a big kiss, which surprises the three girls.

This story was, um, something. It’s the first time that lesbian kisses have occurred in an Archie story, albeit without lip-on-lip contact being shown. It makes no sense that Archie was able to figure out that Betty was the Kisser, though. So Betty’s motive in kissing eight girls was…to create a mystery that no one could solve? Does Archie know something about Betty that would lead him to this conclusion? Is she a mystery writer? Is she bisexual? I don’t get it. Still, this was pretty daring for a children’s comic story from the 1960s.

Tune in next Wednesday!