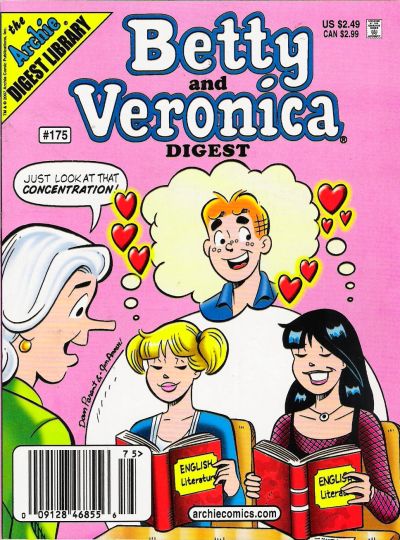 In Miss Grundy’s class, Miss Grundy is happy that the students are concentrating on their books, but she becomes suspicious of Betty and Veronica and confronts them. They were daydreaming about Archie. Veronica even had her book upside-down. Miss Grundy thinks “I can’t blame them! Everyone daydreams!”

When the bell rings, Miss Grundy wishes the class a nice weekend and to do well on the test next week. Betty decides she better re-read the story. Veronica thinks her own mind was on other things in class. Betty asks Veronica if it was a great story. Veronica embarrassingly pretends she read it and says yes. Veronica wishes Mr. Weatherbee a nice weekend, but Mr. Weatherbee is daydreaming about being a super-hero. Betty interrupts, and he says bye to them. Veronica and Betty wish each other a good weekend.

When Betty gets home, she greets her mom, but Alice is sitting in a chair, reading a romance novel, and daydreaming that the handsome hero is giving flowers to her. Betty greets her dad, but Hal is daydreaming about driving a monster truck.

That night, Betty and Veronica go to bed and dream about multiple Archies jumping over a fence.

This “story” (if you can call it that) doesn’t have much to it. Basically, it’s just small glimpses into various characters’ fantasies. Most of it is nothing surprising. However, Mr. Weatherbee doesn’t strike me as a comic book fan, so his daydream is questionable.

It’s nice to see some actual businesses mentioned in an Archie comic: Dell and Ebay.

This story has no real plot to it. It would have been nice to see Betty and Veronica actually taking the test, daydreaming during it, and failing. Instead, the story is made all about Archie.

The differences between the ending of this story and the front cover are Betty, Veronica, and Miss Grundy’s outfits; the color of their books; and the use of individual desks instead of tables.

For the featured story in this digest, I’m not impressed with it. This is one of the laziest stories that I’ve ever read.

I realize this is a short review, so stay tuned for a second comic review soon.